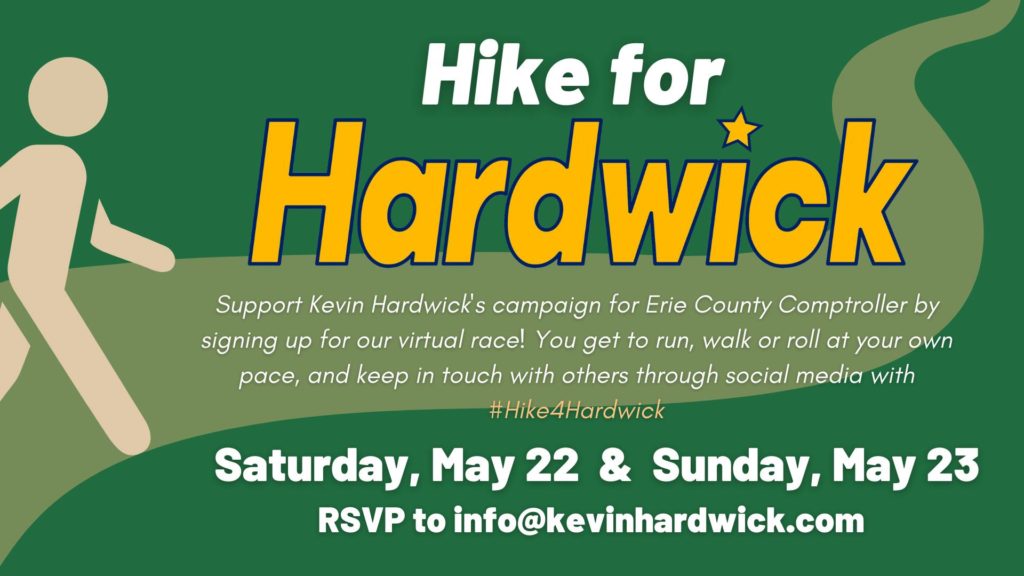 Erie County Legislator Kevin Hardwick is running his endorsed 2021 campaign for Erie County Comptroller in the most literal sense of the word. During the 4th weekend in May, the campaign is hosting a virtual event intended to encourage Erie County residents to get outdoors, support local businesses and generate interest in his bid for office. The event – “Hike for Hardwick” – will operate just as any race or walk fundraiser normally would, except it will operate in three separate locations simultaneously.

The event, which is scheduled for May 22nd through the 23rd, is being advertised as a “run, walk, and roll” in an effort to open up participation to people of all ages and abilities. Participants will choose from three separate routes, which are located across Erie County. No one is obligated to complete the entire distance of their selected route, but all are encouraged to track their distance and share the accomplishment on social media using the hashtag – #HikeforHardwick.

The Northtowns route consists of the entire “Rails to Trails” corridor, stretching from the NFTA station on Main Street in Buffalo to Tonawanda Creek. The Buffalo route is a loop that winds its way through Delaware Park, beginning and ending on Hoyt Lake by the Terrace. The Southtowns route offers a tour of Knox Farm State Park. Leashed dogs are not only welcome, but encouraged for all three.

In addition to drawing attention to his campaign, Hardwick has centered the event around support for local business. The focus around small business isn’t just a metaphor; it’s based on geography, too. Hardwick hopes to drive supporters to stop in the towns and areas they are visiting before and after the event.

“Small businesses are the backbone of the local economy – Erie County relies on foot traffic to these establishments in innumerable ways whether it’s to attract more development, support existing services, or just to feed the local workforce. We know these folks are hurting since the pandemic and want to encourage safely supporting them in any way possible,” stated Legislator Hardwick.

The Hardwick campaign, which has been endorsed by the members of the Erie County Democratic Committee, is running on the principle of “good government.” Hardwick, whose day job includes teaching these at Canisius College, fully intends to practice what he preaches.